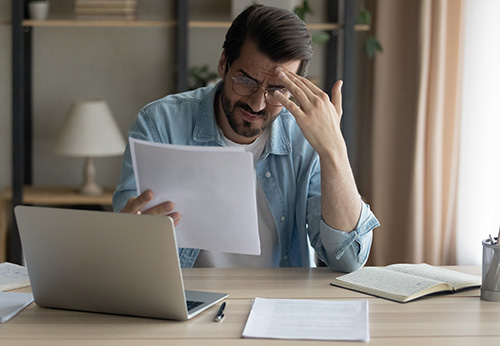 If a consumer thinks that their credit report is inaccurate, they can dispute it and file a report with the CRA, which initiates a reinvestigation duty. In this process, there must be a reasonable examination of the dispute and a correction of any errors present.

Usually, the inaccuracies contained in a report can be corrected very quickly by a CRA – and an agency has 30 days after the notice of a dispute to amend any inaccuracy.

At Citron & Citron, we have had great success reining in these individual claims because we have not seen many cases wherein a consumer can prove substantial damages.

Credit Reporting Agencies Must Correct Any Errors That Are Found

The agencies that I represent reinvestigate challenges because it is their statutory obligation to do so.

When they do, they normally will find the inaccurate information and redact it from that report and provide the individual with an updated report that doesn’t contain any inaccuracies.

Correcting Report Errors: Do You Have to Prove That The Error Was Not Due to Negligence Or Non-Compliance?

CRAs have many defenses available to them in these matters.

Of course, a CRA has to do reasonable due diligence in its reinvestigation. However, if there is a legal dispute on a credit reporting agency act, there is no obligation to fix the issue.

To clarify, a CRA is not responsible for resolving the legal dispute – but it is responsible for performing a reinvestigation to take care of any errors that may be in the disputed report. This is a reasonable procedure and the court uses this standard to eschew negligent liability.

After a dispute is raised, the CRA must provide proper notice to the third-party source that furnished the information which has been disputed. Then, the CRA must modify or delete any inaccurate or unverifiable information. Finally, a CRA will provide the reinvestigation report to the consumer for their records, proving the error was fixed.

Once An Error Is Corrected By A Reporting Agency, How Long Does It Take For The Correction To Take Effect?

The CRA has 30 days to resolve a dispute and send proof of the correction back to the consumer. Most agencies strive to do this as quickly as possible – and some agencies will correct an error the very same day they get a dispute.

Do You See Frivolous Complaints Or Suits Filed by the Consumers Against Your Clients?

If there is an indication that a frivolous suit has been filed, I will immediately contact the opposing counsel and explain to them why the case does not have any merit. We then try to resolve the matter informally and cost-efficiently because that’s in the defendant’s (CRA) best interest.

If the opposing counsel for the plaintiff doesn’t listen, I will begin to prepare the case.

In doing this, we will work to establish that the consumer can’t provide evidence of a negligent or willful violation of the statute. Then, if we can get rid of those claims, we can often file a motion to end the case. If the court agrees, the case will be thrown out.

Should Reporting Agencies Ever Counter In The Case Of A Frivolous Claim?

Counter suing on these claims in California is often a form of “putting good money after bad.”

Instead, it’s typically best to try and convince the opposing counsel that the claim isn’t worth pursuing and to get rid of it, rather than chasing it in the other direction.

This is because, to counter sue, you must prove that there was no reasonable merit in the plaintiff’s proceeding forward, which is a very fairly high standard to reach.

When An Attorney From Citron & Citron Comes In?

The majority of my clients reach out to me only after a case has been filed. Because of this, 95% of the cases that I handle are already in litigation before they ever reach my desk.

A lot of these are “blind lawsuits”, meaning that no demand letter requesting monetary compensation was sent to the CRA or the furnisher/third party vendor before the lawsuit was filed.

This means that we often come in when a lawsuit is filed and we immediately get to work defending it.

For more information on Stakes for Credit Reporting Agencies in a Claim, an initial consultation is your next best step. Get the information and legal answers you are seeking by calling (310) 504-3347 today.

Citron & Citron is a firm founded on integrity, hard work, and loyalty. Creative and innovative ideas are used to achieve successful resolutions of cases on behalf of clients. Its attorneys take pride in the breadth of the firm’s practice and working with diverse clients.

Founded in 1981, Citron & Citron has earned a reputation for excellence in the legal community. The practice is distinctive in its ability to respond to its clients’ professional needs while also providing a high degree of personal service. Over the years, Citron & Citron has handled a broad spectrum of cases with an emphasis on trying high exposure complex cases.

The attorneys at Citron & Citron cumulatively have over 150 years of experience in all aspects of civil litigation. Cases are resolved through negotiations, mediations, arbitrations, trials, and appeals. No client is too small or too large to benefit from the firm’s personalized approach to the handling of each case.

Both Tom and Joel Citron are members of the American Board of Trial Advocates (ABOTA), an exclusive organization comprised of experienced trial lawyers and judges that requires its members to be responsible for elevating the standards of integrity, honor, ethics, civility and courtesy in the legal profession. Beyond membership both Tom and Joel Citron have taught at the annual ABOTA trial school and have sponsored attorneys at the firm to attend the program.

The firm and multiple of its attorneys are AV Preeminent® peer rated by Martindale-Hubbell®.

With over 150 years of combined experience, the Law Offices of Citron & Citron is a team of professionals who are dedicated to serving their clients’ legal needs in matters pertaining to real property, business litigation, products liability, premises liability, intellectual property, professional negligence, transportation liability, insurance, elder care, foster care, fair housing, and the environment. By providing a wide range of services, the attorneys at Citron & Citron offer an immeasurable amount of invaluable expertise, knowledge, and insight that spans throughout the legal sectors they practice.

As a client, you will significantly benefit from the vast resources, tools, and experience that becomes available to you as part of the Citron & Citron family. Since the primary objective is to obtain successful resolutions, our firm is readily equipped to propose various innovative and creative solutions to fit each of our clients’ unique cases. Our firm’s sound structure draws on the skill and wisdom of our attorneys and colleagues to achieve favorable results in both state and federal courts.

At Citron & Citron, we are committed to assisting our clients through complex and challenging cases. We comprehend the intricacy of negotiating and mediating outside of court and litigating inside of court. Our competency and talents afford us the ability to represent our clients effectively. By treating each case with the attention to detail, thoroughness, and personal care it deserves, we are able to furnish our clients with agreeable outcomes. Located in Los Angeles, CA, our firm practices in Los Angeles and surrounding areas…Read More about Firm Overview

When a real property dispute emerges, it is essential to consult with an experienced real property attorney in Los Angeles, CA. Disputes can occur over a breach in contract, property title, boundary matters, and other conflicts that involve the purchase and/or sale of real property. Without the assistance of a knowledgeable real property attorney in Los Angeles, CA to help you, you could spend an excessive amount of time, money, and resources trying to solve your matter with no solution in sight. Hiring the right representation will not only relieve you of a complicated situation, it will also lend you peace of mind. When a dispute ensues, our attorneys at Citron & Citron will work with you to create a strategy that could help you avoid further escalation or litigation. However, if litigation is necessary, we are readily able to efficiently and aggressively represent you in court.

When business affairs do not go as planned, a wide array of legal issues can follow. Even if you have taken proactive steps to avoid a legal dispute, issue, or action, there are certain circumstances in which litigation is unavoidable. When that happens, it is wise to prepare and hire a Los Angeles Business litigation attorney. Hiring a professional business litigation attorney in Los Angeles who is not afraid of taking action in court is crucial. It is vital that your business litigation attorney approach your case with your best interests in mind, all while protecting your rights. At Citron & Citron, we are focused on our clients’ goals, rights, and objectives. We understand that together we are a team, and that in order to reach a favorable resolution, we need to work with one another.